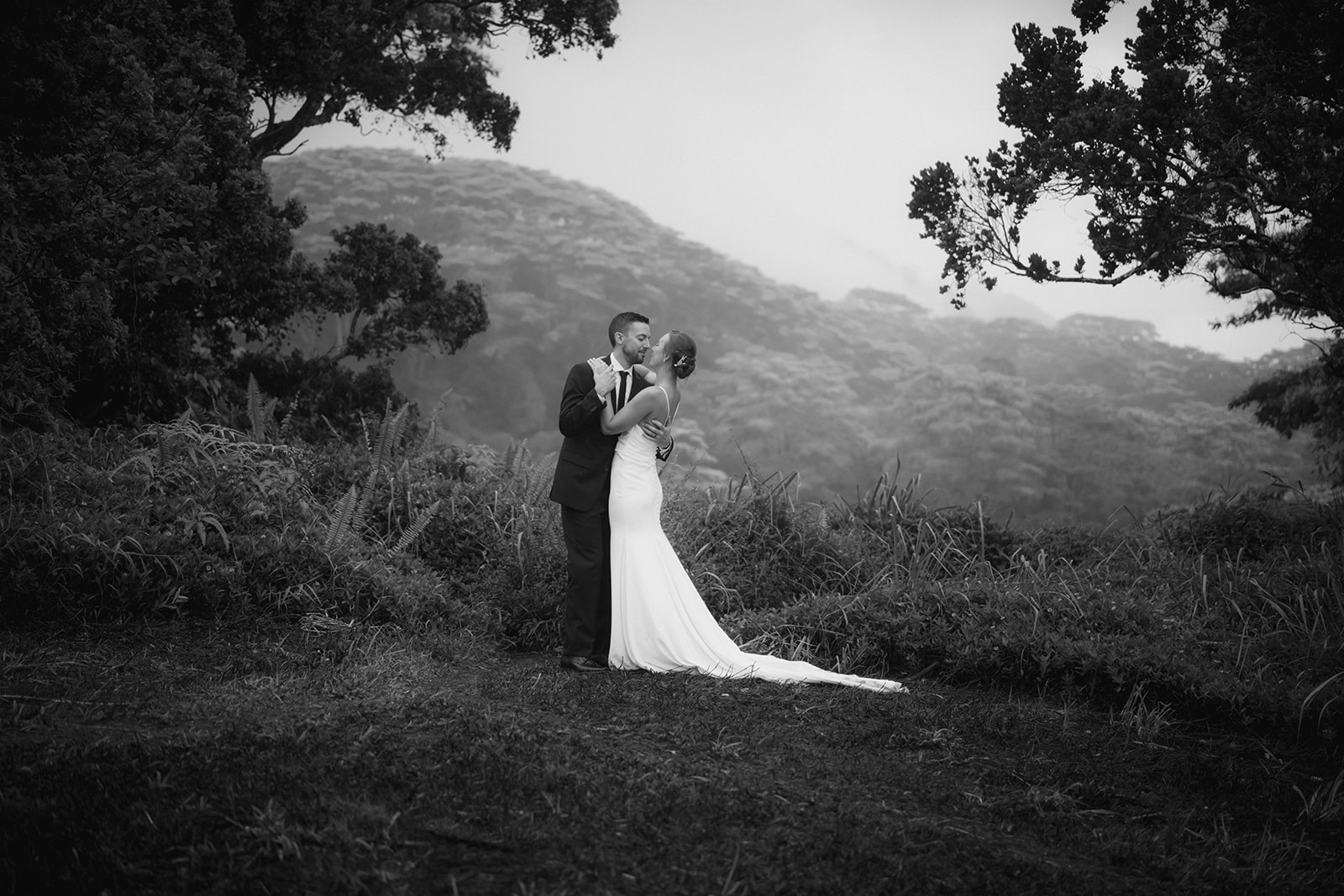 We nervously watch the radar all week; knowing that Kauaʻi is the wettest place in the world, we expected some showers. But we shoot rain or shine, and all other couples know that going into their elopement day. So, prepped with rain jackets, yaktrax, towels, and all the rest of the gear we needed to haul up the mountain, we waited at the start of the trail for Amy and Nic to arrive. Just before their car pulled into the parking lot, the skies opened up. But these two were troopers. They weren't going to let a little bit of rain ruin their special day and had smiles on their faces the entire hike up. And as the saying goes, you can't untie a wet knot, which is why rain on your wedding day is good luck!

But the rain seemed to be a blessing in disguise, keeping other hikers off the trail. We only saw two other people the entire time, which is pretty rare for Hawai'i. Boy, was the spot magical! Amy and Nic chose this location from those we suggested for its beautiful panoramic view and relatively easy access. At the top, Amy and I took over the pavilion while she changed into her gorgeous wedding dress, while Patrick and Nic walked farther down the trail and the pouring rain to prep for the first look. Nic had the absolute sweetest reaction to seeing his bride for the first time. A first look can be such a lovely addition to an elopement day. Honestly, that's one of the greatest parts of eloping! You can choose to do just the wedding traditions you want and nothing you don't. With intermittent bouts of rain the entire afternoon, we periodically took shelter under the leaky pavilion. When the skies finally cleared again for a short while, we walked to the edge of the ridgeline, where we had a gorgeous view of Kauaʻi's vast tropical forest. Amy's father sent us a letter beforehand to read during their ceremony, filled with words of love and encouragement that I read before they shared their vows. They laughed, cried, and solemnize their vows with one another. when we perform ceremonies for couples, we encourage them to take the lead instead of a traditional officiant. Because really, the only person who can say you're married and make it last is you. So, after they committed themselves to one another, put on their rings, and sealed their vows with a kiss, it was time to pop some bubbly! The rest of the evening was intermittently spent hiding from the rain end playing in it.

*Permits for this location were acquired in advance. Please follow local laws and regulations if visiting Hawai’i.

“Amy is originally from Wisconsin and moved out to Oregon in 2015 to focus on environmental education and farm-to-school programming. Nic is born and raised in Oregon and currently works for the city’s planning department with municipal code enforcement. We met in McMinnville, Oregon during an annual UFO Festival in 2016. Nic was living there at the time, and Amy was a few hours away in southern Oregon. We happened to meet at the festival (in full alien attire) after being introduced by a mutual friend, whom we are so grateful for! We spent the day dancing, eating tater tots and brats, having some beers, and getting to know each other. After that weekend, Nic asked Amy on an official date and we’ve been together ever since. We did long distance for the first year of dating and have been living together in McMinnville ever since with our golden retriever named Maple. A few things we love to do together include spending lazy weekend mornings drinking coffee in bed, cooking together (Nic is a fantastic griller!) hanging out at our favorite local breweries with friends, watching Netflix, going to the beach, and checking out all the amazing hiking spots around us. Nic proposed while we were camping in July 2020, which brought some much-needed happiness, excitement, and distraction from all the craziness in the world around us. We talked about eloping in Hawai'i, even before we were engaged, and it’s always something that felt right for us. After Nic proposed, we discussed our options for a ceremony, including a large traditional wedding, but we kept coming back to the idea of an elopement. We decided that doing something unique, adventurous, and intimate is exactly what we wanted when we say “I do.” We plan to have a reception in Wisconsin with all of our friends and family two weeks after our ceremony in Hawai'i.” 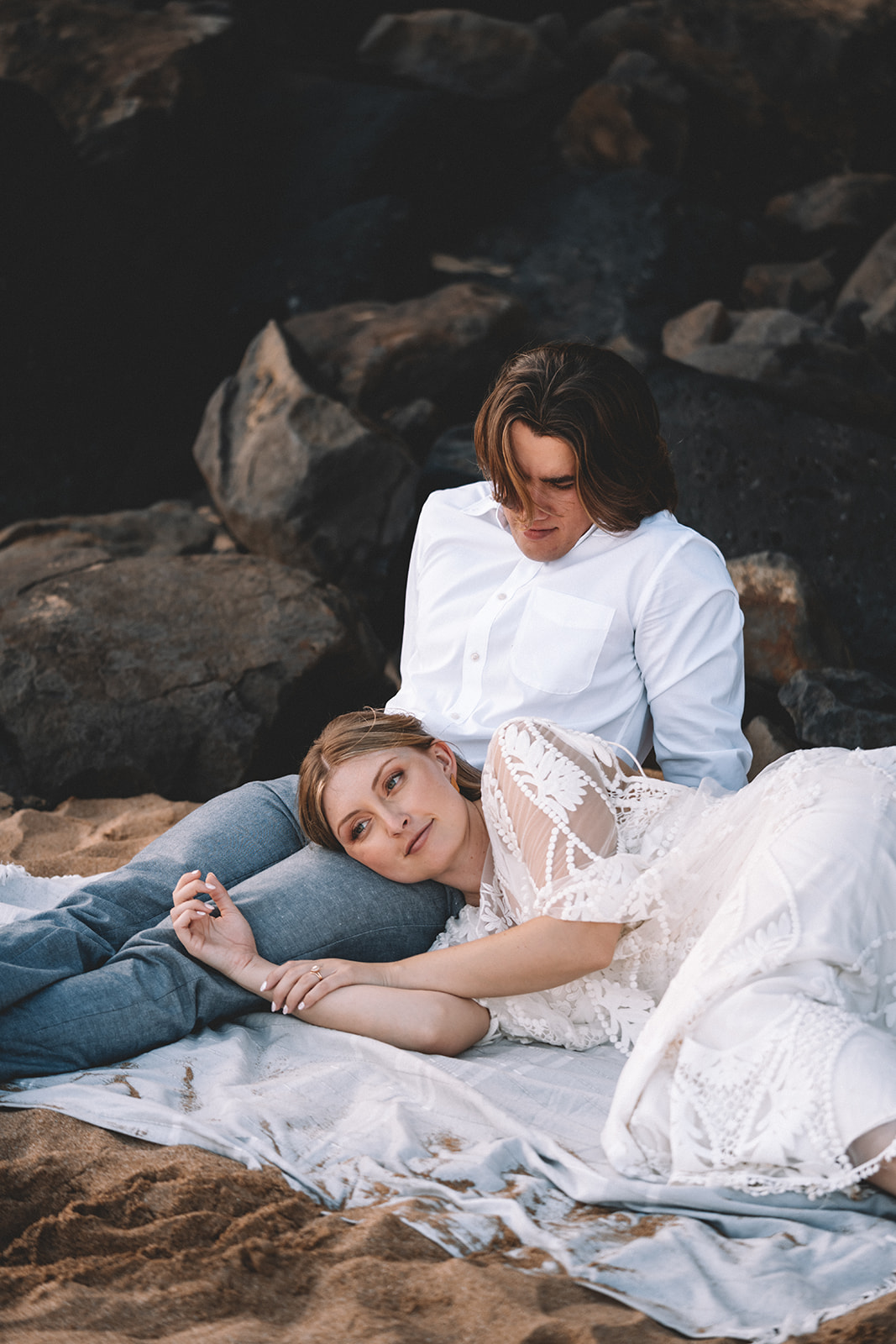 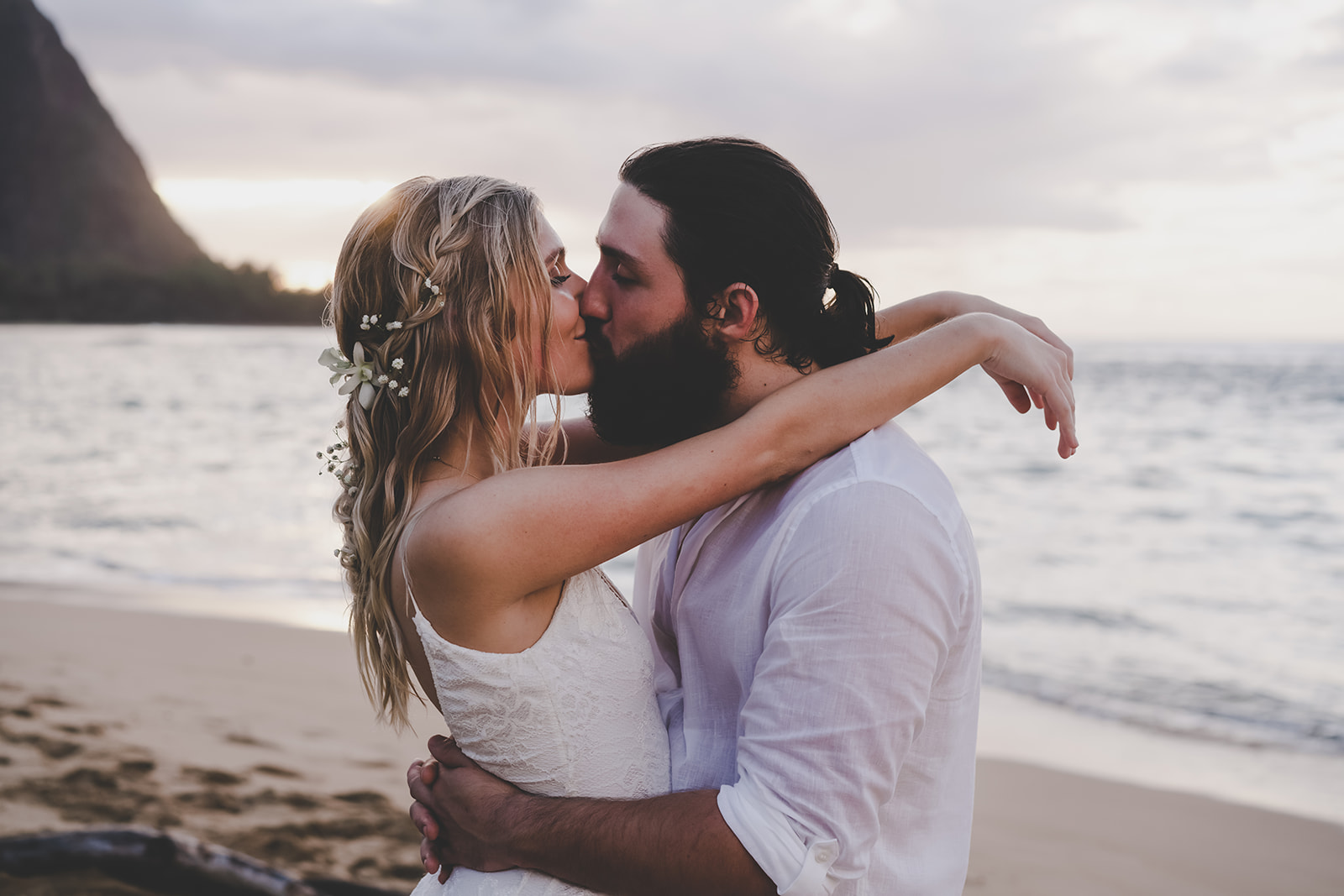 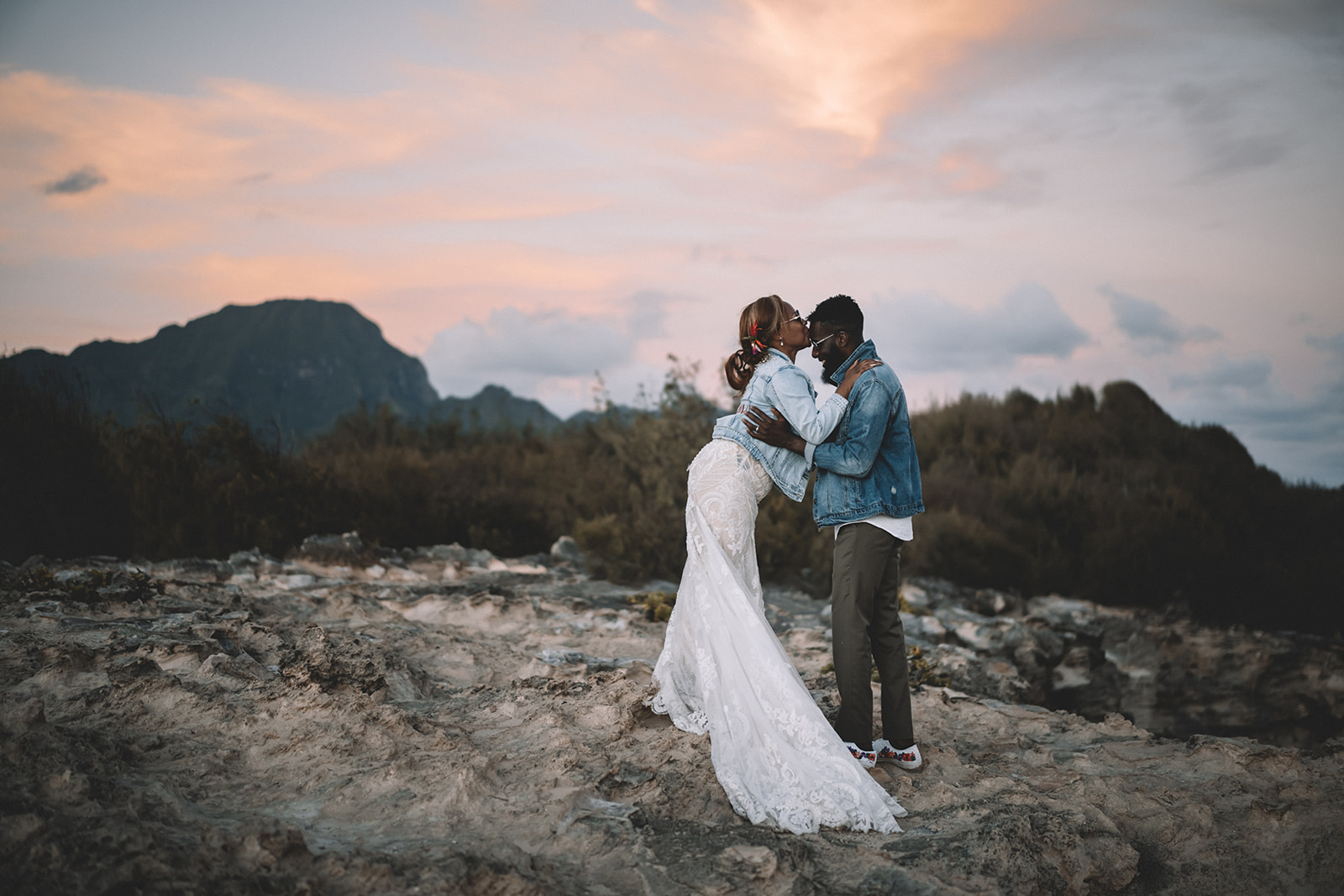